This is our first post of 2017, having spent most of the winter in the relative luxury of Yelvertoft Marina. We have had a few jobs to sort out prior to commencing our travels on the waterways, including, changing the primary fuel filter, replacing a noisy and temperamental fresh water pump, and servicing our hurricane diesel heater. We have also had one or two days when the weather was so nice, it would have been criminal not to take the boat up the cut for a spin. It was during our last cruise a couple of weeks ago, we developed a bit of tiller wobble, well in fact more than a bit, it was quite a lot. Once back on our berth, it was down the weed hatch for the first time since the boat was built, to remove whatever had attached itself to our propeller. It couldn’t be anything more serious than rubbish round the prop, as we had not heard any noise of the propeller striking a hard and unforgiving object. How wrong. As I felt the prop whilst perched upside down in the weed hatch, it was quickly apparent that the prop was no longer the shape it should be.  Today, it was round to the slipway to be dragged out by tractor for the new Axiom prop to be fitted. This was also the first time I could see how the hull was looking following our zinc treatment at Debdale Wharf. The hull looked as clean as a whistle. The prop however was a bit more bent than I thought. 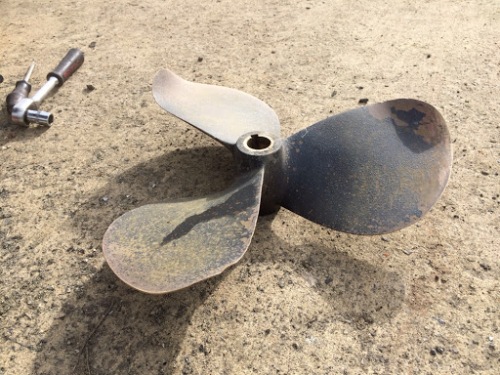 The prop needed a bit of encouragement to free itself from the shaft, then it was time for the nice shiny new one to be attached. All in all the whole process took 15/20 minutes. 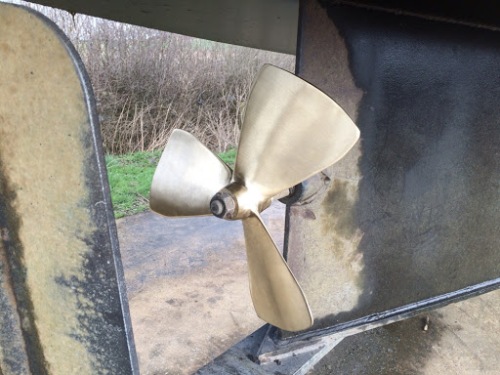 Shortly after lunch we were relaunched, and we made our way back to the berth. One of the claims made by Axiom, is the design of their prop allows for stopping in much shorter distances. I tried this, and it did seem to be the case that we stopped much quicker than previously, and also maintained a straight line. We will give it a proper trial later in the week, when we set off on our eight month journey.