During yesterday evening the mooring at All Oak Wood slowly filled, all the way back to the Easenhall Lane bridge. This morning before getting out of bed we were aware of a constant stream of boats passing by, although with the porthole bungs still in we were unsure which way the traffic was heading. At nine o’clock the furry crew had his breakfast and stepping off the boat to allow him to stretch his legs we saw that barring a few long stayers we were alone. The boat traffic had all been heading towards Hillmorton, and we would shortly be following. The weather was fairly chilly but fortunately the wind speed had dropped substantially. We got underway around 9.30 and almost immediately began to encounter oncoming boat traffic. At Hillmorton there is a flight of three locks and we had decided to ascend the flight then stop for lunch. The plan was after lunch to head for a nice mooring just outside Braunston. First we had Newbold Tunnel and Rugby to navigate. On exiting the tunnel the canal is narrowed by overgrown bushes on the offside and with mooring and a water point on the towpath side, the bend is blind and ripe for chaos if boats meet head on. This time we were lucky. At Brownsover it appears that lots of new mooring rings have been installed, but again this short stretch of canal is overgrown and bendy, so not an ideal location for a line of moored boats, although handy for the shops and retail park. Safely through we arrived at Hillmorton to find two boats waiting in the queue for the locks. However, we were told by several people that our arrival was perfect timing as earlier the area had been chaotic with waiting times of two and a half hours. I felt smug taking that extra half hour in bed now. The only slight issue was the two boats ahead of us were hire boats, the crews of which did not seem to want to work other boats up and down the flight. This slowed our progress a little.

Hillmorton locks are set in pairs so working through them should be quick. Sadly the middle lock on one side has been out of action due to a broken balance beam, I believe for some time now. It seems as though for some reason the navigation authority are taking their time in repairing it.

If anyone is wondering where all the boats are, we have found them. Rugby, Brownsover was full up and so was the entire stretch above Hillmorton Locks. We have not seen so many boats here previously. This put paid to our planned lunch stop and we now had the prospect of getting to Braunston without a break. As we left Hillmorton behind and just prior to joining the Barby Straight we saw a single boat length of pilling. This is nice a rural spot by bridge 75, and opposite a Christmas Tree Farm. This will be our stop for the night and has been recorded in our guide book. The mooring is nice and deep, we have a sky satellite signal and 4G. 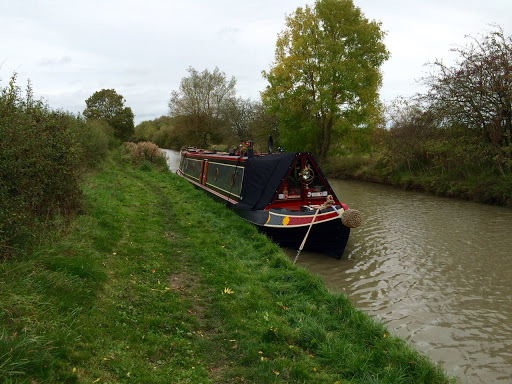 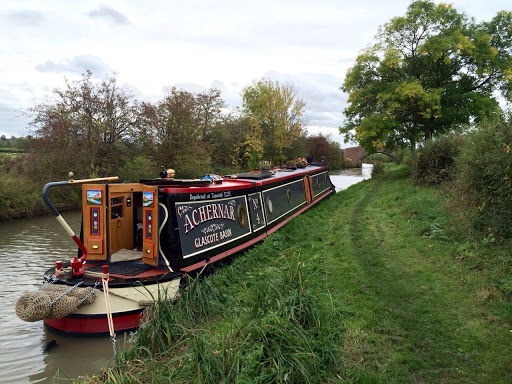 We plan to travel to Braunston tomorrow and maybe visit the chandlers. We won’t be making any purchases though as Midland Chandlers are holding a Freaky Friday event next week when we will get 20% off.

This morning, the mist floating over the canal as the sun began to rise made getting up early worth the effort. We slipped away from our mooring at 8 am for the short 100 yards journey to the water point. We needed nearly a full tank, and it was a slow filling tap so it was 45 mins till we were off. We turned right at the junction onto the G.U. main line and saw that there was a boat ahead of us by 400 yards or so. This I hoped would be our locking partner for the wide locks at Braunston. As we travelled through Braunston tunnel, I could see the boat ahead slowing due to an oncoming boat. Then we heard the bumps. It gave me a clue what to expect, and sure enough we got bumped too. It was a Napton narrowboats hire boat, and they clearly did not realise that slowing down a bit might help. Thankfully we did not meet them at the well known kink in the tunnel so it was only a glancing blow. Emerging into the daylight we soon arrived at the locks which were set for us. Nb Eleanor was to be our locking partner through Braunston locks. I suspect we may see them again over the next few weeks as they are also heading north towards Liverpool.

Immediately after the bottom lock is a chandlers. We needed some adhesive treads for our steps so a brief stop was made. We then continued on through Braunston, breathing in deeply as we past the Gongoozerlers Rest, the smell of cooked bacon ready to tempt you. Braunston as expected was busy with not much space to moor, not that we were stopping anyway. At the junction, we turned right and joined the Oxford Canal. Leaving Braunston behind the sun broke through the clouds and we began looking for a place to stop. We are now moored in a nice rural spot, roughly midway between the villages of Willoughby and Barby.

We will stay here till Thursday, then we head off for Hillmorton locks and All Oak Wood beyond. I might even have another go at fishing. Whilst writing this Nb Eleanor passed by so if you read this it was nice meeting you and maybe we will see you again.
Totals 5 Miles 6 Locks 1 Tunnel