Since joining the Llangollen Canal, we have been in a virtual Black Hole as far as 3G and internet coverage is concerned, hence several posts today by way of updates. Having used up our allotted time at Wrenbury, on Monday it was time to move on. The weather had forecast rain, due to arrive by lunchtime. They got it wrong. It was raining when we got up. It was still raining after we had used the services at the ABC boat hire base. We made our way through the electric lift bridge, stopping about half a dozen cars whilst we did so. Then it was on towards Grindley Brook. Still being rained on, we quickly reviewed that decision and stopped for the day just below Marbury Lock. It was a good decision as not long after it poured down, and continued like that for much of the day. 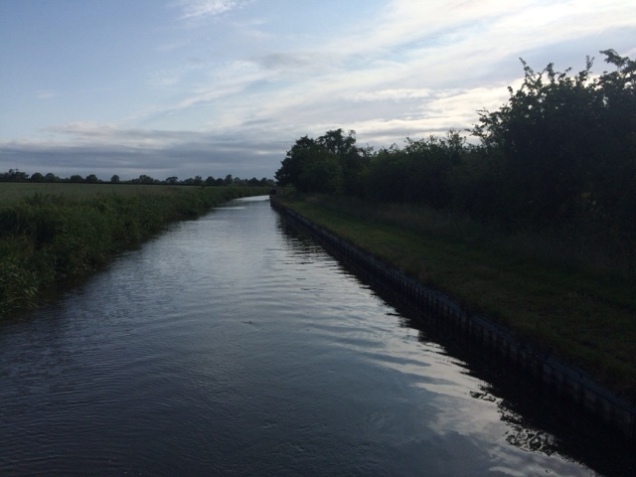 Our spot at Marbury.

The weather forecast today was for rain and possible thunder storms by mid afternoon. With this in mind we got up at an early for us 7 am, and were underway just before 8. Our plan was to get to the water point above the Grindley Brook staircase locks. We began the day with sun and blue sky, however we could already see the next band of cloud making progress. We had five miles and four locks to navigate before reaching Grindley Brook, and all the while the cloud was increasing and darkening. As we were arriving towards the bottom of the lock flight the first drops of rain began. We pulled in on a straight stretch of towpath just ahead of some reed beds and moored up. The weather is suspect for tomorrow also, so we may stay here till Thursday or Friday. 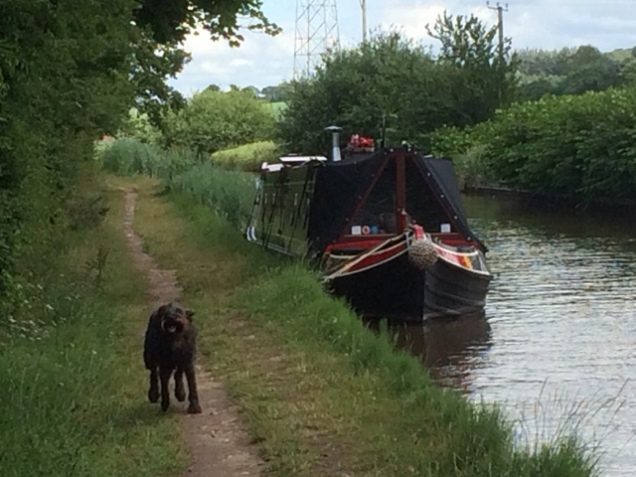 This is a good spot as it is south facing so if the sun does make an appearance the solar charging will benefit. We have a clear view to the sky satellite and we also have 3G and Internet. If Oscar is looking blurred and slightly deformed it is because he chose this precise moment to charge full pelt up and down the towpath.
Monday totals 2 Miles
Tuesday totals 5 Miles 4 Locks
Running total 315 Miles 153 Locks 11 Tunnels