Following our roast dinner at the Rising Sun PH on Sunday, we had another wet day to endure on Monday, although we did manage to give four legs a walk into Shackerstone before the rain arrived. Tuesday 1/5. the weather finally turned, and got to see the sun once again. We set off after breakfast for the end of the canal, a little over four miles away. As we passed through Shackerstone, we noted that there were not many boats visiting, and so it would be at Snarestone as well. We trundled along at just above tickover in the warm sun, the wind however, was still biting.

The tunnel at Snarestone is fairly short but very crooked, and as such only single way working is permitted. We approached slowly, as it is not until the final few yards prior to the entrance, before you can see through to the other side. It was all clear so in we went, remembering to duck as we proceeded, due to the roof lowering towards the northern end. 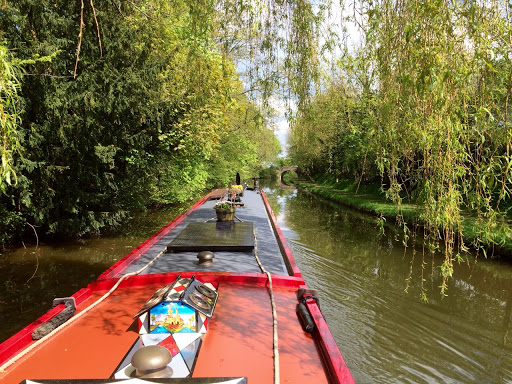 Once beyond the final bridge, we found the mooring empty so had our choice of spot. Several boats did arrive after us, but did not stop long, so we have had the place to ourselves. 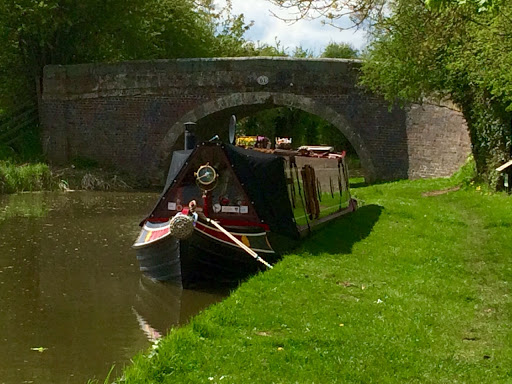 We are moored about 50 yards from the winding hole at the end of the canal. There is a Wharf here run by the Ashby Canal Association, and beyond the winding hole is a newly restored section of canal. We disposed of some rubbish, and popped into the association office for a catch up. Last year we took out membership, and we have since updated this to become life members of the association. The next major project in the restoration, is to build an aqueduct over Gilwiskaw Brook, which is hoped to be commenced this year. Once that is done there is only the small matter of two miles of canal to reinstate, some of which, is having to take a new route to that of the original cut. I was told that they hope to be in Measham in about five years. Today we wandered off to the Globe PH for lunch. I had the steak and ale pie, with proper shortcrust pastry. I can definitely recommend it. Our plan tomorrow is to fill the water tank, wind, and head back to Shackerstone settling for the Bank Holiday Weekend. We expect it may get busy as some fine weather is forecast.