Having spent an enjoyable few days at Hawkesbury Junction it was time to move off. Just as we were preparing to depart, nb Neston passed us and moored a hundred yards ahead. I expect we will be playing leap frog with them for the next week, all the way to Glascote Basin. We stopped on the water point, just prior to the stop lock and filled with water. In the time we were there, four boats passed through the lock, which lowers you from the Oxford Canal onto the Coventry Canal, a drop of about 1 foot. We navigated through the junction, passing the Greyhound P.H. where we enjoyed Sunday lunch, and joined the Coventry Canal heading towards Nuneaton. The rain had been threatening for some time, and just as we approached Nuneaton, the clouds burst. For about ten minutes it felt like we were in a tropical storm, it was torrential. As quickly as the rain came, so it disappeared, and the sun came out. In no time, everything, including myself and the crew were dry again. Nuneaton seems to have cleaned up its act, as the canal was reasonably rubbish free, which was not the case on previous journeys. We passed through the town and head back into open countryside, arriving at our mooring spot just prior to Springwood Haven Marina. This is a nice rural spot and we were alone. We joked about how long it would last. It was twenty minutes. Still never mind, as we are staying put for a few days. After lunch we walked to the marina to check out the services, as we will need these when we depart on Thursday or Friday. 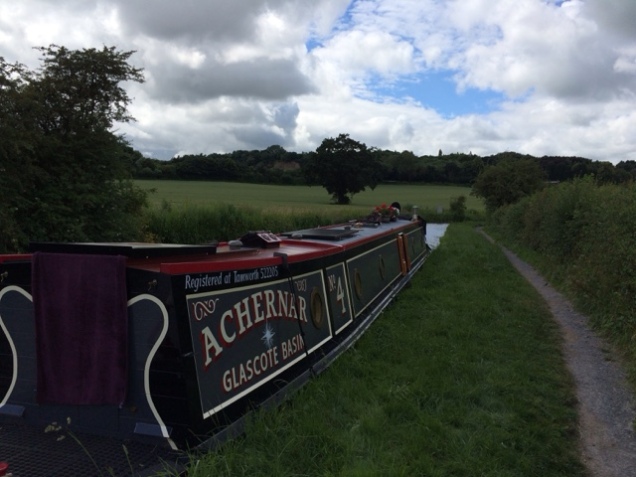